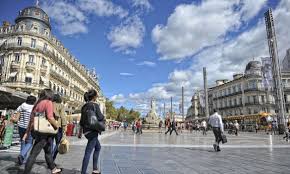 Montpellier really is special. With its broad boulevards lined with shady plane trees, a huge car-free central square laid out in the 1700s surrounded by elegant balustraded buildings and its vast triumphal arch.

If you’re in the market for chic boutiques, designer wine bars, music and art, then Montpellier is the place for you. Languedoc-Roussillon’s capital city is arguably the chicest spot on France’s south coast.   The nightlife, fashion and café culture, up-market wine bars, modern restaurants and smart stores cater for most tastes, youngand not so young!

Visitors tend to start their visit to Montpellier on the central expanse of Place de la Comédie, seduced by its café terraces and imposing 19th century opera house before heading to the pedestrian-only sweep of Montpellier’s rue de la Loge, the ancient and most attractive part of town known as “l’Ecusson”.  Here you will find lively narrow back streets and attractive squares, packed with bistrots serving southern French cuisine.  Place Candolle and Place de la Chapelle Neuve are both perfect for al fresco dining.

Take some time to wander around the handsome ancient buildings and elegant hôtels particuliers (private mansions) of Montpellier’s historic center.  The 14th century Cathédrale de Saint Pierre, the 16th century botanical gardens (le Jardin des Plantes) and the imposing Arc de Triomphe lookalike at the end of rue Foch are all worth a visit. 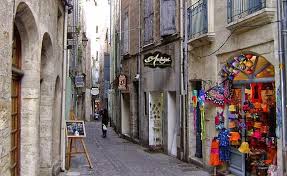 Once the capital of Languedoc, this beautiful small town lost claim to political power in the late 17th century – happily, this means the town escaped development in the 1800s and its striking heritage has thus been well-preserved. With its streets of honey coloured stone, elegant houses adorned with wrought-iron balconies, and wonderful blend of architecture – from Gothic to gracious 18th century properties – Pézenas is a must-see town during your stay in this region.

The whole of the old town lends itself to cinema and the theatre. Inspired no doubt by the peppery humour of the inhabitants, Molière is reputed to have created some of his famous characters right here in Pézenas in the barber’s shop (now the tourist office). Invited by the Prince de Conti, Molière first made his reputation down here in Languedoc and not in Paris from where he had fled with his “illustrious theatre”. It was not however until the 19th century that the townspeople decided to venerate Molière in an almost excessive way. A fine statue sculpted by Antonin Injalbert was erected to the memory of Molière in 1898 and the town museum contains rare traces of the great but elusive playwright.

Stroll around the narrow streets of the charming medieval old town, stop for a coffee outside one of the cafes in Place Gambetta, and try a local speciality ‘Le petit pâté de Pézenas’. The size and shape of a large cotton reel, these little pies are a golden brown, crispy pastry with a moist, sweet inside. They can be eaten as an hors d’oeuvre, with a salad or as a dessert. They are cooked in patisseries all over the town, but their origin is far from local. Tradition has it that Lord Clive brought the recipe from India and taught it to the pastry makers of Pézenas when he was staying at the Chateau de Larzac in 1768.

Throughout Languedoc Béziers is known for two things in particular: wine and bullfighting. Undoubtedly the best time to visit this town is during the four-day long feria in the middle of August when you can combine both! Béziers is also perfectly situated for excursions into the Haut Languedoc, a rugged and untamed mountainous region of picturesque stone villages and cascading mountain streams.  An amble through the old town, bordered on three sides by the Orb river and a canal, is extremely pleasant. A relaxed mix of French and Spanish culture, Béziers is off most tourist agendas, so if you’re looking for a taste of the real Languedoc, this is where you will find it.

The Cathédrale St-Nazaire is the main sight in Béziers. This grandiose Romanesque cathedral dates from the thirteenth century and occupies one of the best sites in town: from the concourse in front of the cathedral there are terrific views out over the surrounding vineyards and towards the foothills of the Massif Central to the north.  There are several interesting museums, the bull ring is worth a visit and many nice bars and restaurants to choose from.

Thirty minutes by road to the south-west of Sète (25 km), is the ancient town of Agde – the second oldest settlement in France after Marseille. Founded by the Greeks in the sixth century BC, it was a very rich and busy port for centuries, as the wealth of finds in the museum attests. There are quantities of intact amphora here; Roman millstones; enormous and stunningly complete dolium storage jars; decorative wine vessels and more. In pride of place is Ephèbe, a near life-size bronze believed to be a statue of Alexander the Great.

A lava flow dating back to about 1 million years ago created Cap d’Agde and its cliffs. In 1629, Cardinal Richelieu envisaged the building of a large port, which the kingdom of France lacked in the Golfe du Lion. The death of Richelieu in 1642 slowed down the work, which was abandoned in 1651. But the dream of a large port didn’t die, and today Cap d’Agde is one of the largest leisure ports on the French Mediterranean. Numerous bars, restaurants and lively nightclubs surround the marina. Also, check out the Ephèbe Museum – an amazing gallery that displays treasures found in the sea immediately surrounding the town; a great many of which were found and donated by recreational divers.

A few kilometres north of Sète lies the spa town of Balaruc-Les-Bains. It was the Romans who first started using the warm thermal springs here for the curative treatments and therapeutic sessions. Today the town is the third largest spa resort in France (see the ‘Relaxation and Wellbeing’ pages for more info).

Balaruc-Les-Bains has a mini-golf course, a little train on which to tour the town, Le Petit Train de Balaruc, and a charmingly retro sweet manufacturer to visit, La Cure Gourmande, set in the towns former railway station. 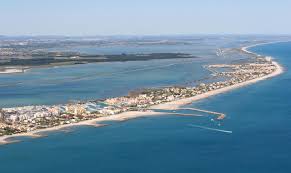 Just east of Balaruc, there’s a happy mix of inland nature, seaside sport and historic charm around the market town of Frontignan. Set on the Peyrade and Ingril lagoons, which adjoin the Etang de Thau by way of the Canal du Rhône à Sète, Frontignan centres on a lovely 12th century church, whilst its lagoon shores present 7km of golden beaches.  Walk among the flamingos and other wildlife in the salt-marshes and along the coast.